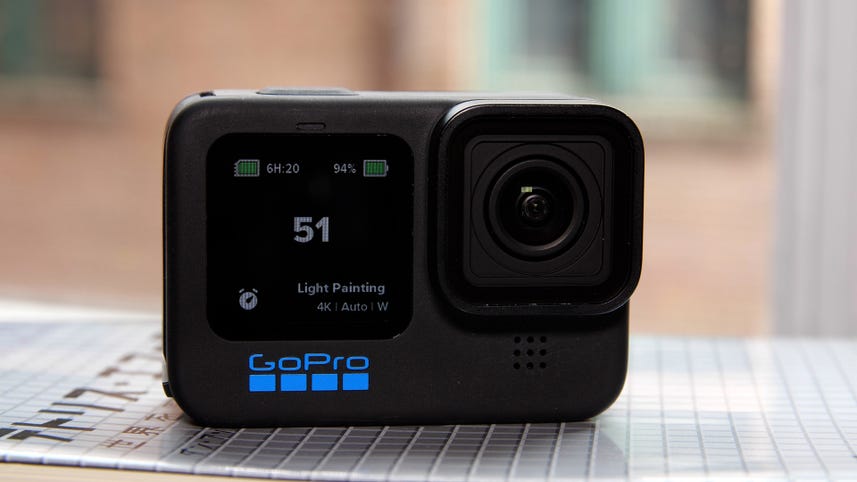 Speaker 1: Hey there. I am talking to you through the GoPro hero, 11 black GoPro’s new flagship camera. And if you’re wondering why this video is squareish instead of the typical wide screen format, or even a skinny vertical video, it has everything to do with the camera’s big new feature. And that could change how you shoot, especially if you use a GoPro for social. Oh, and the hero 11 black. Isn’t the only camera coming from GoPro this year, but first [00:00:30] let’s get into the 11 black.

Speaker 1: So the star of the show is the camera’s new image sensor. It’s a larger one over 1.9 inch sensor. And while the increase might improve quality sum, it’s more that GoPro is using the full sensor to record 5.3 K resolution video with an eight seven aspect ratio. At that size, you can shoot one clip and then cut it into 16, 9, 4, 3 [00:01:00] or one 11, or flip them and get vertical video at 7 8, 3, 4 or nine 16. And you can do them all fast and easy in GoPros quick app. Plus with all the extra resolution you can crop in and still have good looking results. This sensor also enables GoPro’s hyper view and even more immersive wide angle shot [00:01:30] compared to the super view setting on prior models. The distortion out to the sides is extreme. So you might want to use this sparingly, but it is a pretty great effect.

Speaker 1: Uh, the hero 11 also has the fifth generation of hyper smooth GoPros digital image stabilization. It continues to be impressive in the bumpiest of situations. And now it’s improved when shooting four, three video and in super view, and you can shoot linear video [00:02:00] with horizon lock, which means the camera can rotate 360 degrees, but the video remains right side up and level two other new features for advanced shooters. Uh, the bit rate can be switched to capture at up to 120 megabits per second. And you can turn on 10 bit color. So video has more detail, more colors and smoother gradients and less color banding while I’m on the subject of settings. The [00:02:30] hero 11 has a lot of them and it can be a little much, so go procreated easy and pro modes pro unlocks all the settings while easy mode takes it down to just a handful of options that are controlled with shortcuts on the touch display, choose a digital lens, pick a shooting speed and press record.

Speaker 1: Oddly, I found the easy mode confusing at first because I’m used to the regular now pro interface. Uh, but [00:03:00] if you don’t want to mess with settings, you now have an option to simplify things as for new shooting modes. There aren’t a lot, but GoPro added three new long exposure TimeLapse options for use at night. If you live somewhere where you can see stars, you can capture star trails as the earth rotates. There’s also a vehicle light trail mode and a fun light painting option. What’s nice is the quick app makes it easy to grab single frames from the videos for high res photos from these [00:03:30] modes. GoPro also optimize the camera to improve battery life like reducing power use when the camera is on, but idle, uh, the hero 11 also comes with GoPros Enduro battery, which not only lasts longer, but works better in cold too.

Speaker 1: Uh, but if you really want to extend battery life, you’ll be able to get a hero 11 black creators edition, which includes the V battery grip. I shot for hours with it and never worried [00:04:00] about running out of power. What I did run out of is storage space because the high res high bit rate video creates big files. So you’ll want a big, fast micro SD card with this camera. Two more things before I wrap up, uh, GoPro really has been pushing its cloud subscription service for the past few years, offering big discounts on new cameras and other gear its best feature is auto uploads so that when you plug in the camera to [00:04:30] charge, it will automatically save your clips and photos to the cloud service for immediate sharing and safe keeping. Now, though, when you auto upload to the cloud, either directly from the camera or through the quick app, you will automatically get back an edited highlight video made from what you just uploaded.

Speaker 1: You can then tweak that if you want or share it as is the feature only just came online. So I was only able to put together one from [00:05:00] my commute, from New Jersey to New York, but it worked. And it’s definitely cool to get a completed video without having to do anything beyond charge the camera. And as I alluded to earlier at the top, the hero 11 black isn’t the only new camera from GoPro. There is also the hero 11 black mini. If you remember, several years back, GoPro had a tiny cube camera with no viewing screen called the session. It didn’t have the best image quality, but it [00:05:30] was small and you could Mount it in places not possible with the larger heroes. The mini is kind of like that, but essentially has all the shooting resolutions and speeds available in the 11 black. Now let’s talk pricing.

Speaker 1: The GoPro hero 11 black is $500 and is available today. The creator edition, which includes the camera, the vault battery grip, the medium mod and light mod is $700. And the hero 11 mini, [00:06:00] which is expected to be available in October on the 25th, it will sell four, $400. If you’re a GoPro subscriber or become one, the black drops to $400. The creator edition drops to $580 and the mini is just $300. So all in all, it’s a pretty great upgrade. If you’re a couple GoPro cameras behind or you are a creator or enthusiast looking to really punch up your photos and videos, uh, [00:06:30] for the average GoPro user, there’s not too much here to warrant and upgrade from the 10 black though. You might want to pick up the mini four, two camera shoots. Plus the automatic highlight videos are available to any GoPro subscriber with a hero five black or newer. So it makes more sense to put your money into a subscription, which is $50 a year. A one year subscription is included with a new camera purchase to, if you do decide to buy an 11, you can sign up for that as well. Well, [00:07:00] that’s all I have for now. I’m Josh Goldman with CNET. Thanks for watching.

Do you enjoy cable clutter? Is your idea of a good time hunting around for the right adapter to connect a laptop to a display? If the…

Creatives and gamers alike — do you need an advanced laptop for your digital pursuits? The fast, powerful Surface Laptop Studio might be the tool for the…

Apple has a jam-packed slate of products prepared for 2023, Bloomberg’s Mark Gurman predicted over the weekend. In his latest Power On newsletter, the Apple-focused journalist says…

Lenovo Duet 3 Review: More Than I Expected From a Budget Laptop

I like cheap laptops. More accurately, I like good cheap laptops… but those can be hard to find. For every hundred bucks that gets trimmed off a…

Now that it looks like remote work is here to stay, you may be looking for a more permanent computer for your workstation. Apple computers claimed nearly…

Speaker 1: Last year’s Tesla AI day gave us a demo of full self-driving technology and a weird dancing robot. This year, we could see the first…